The traditions of craftsmanship in Matera have ancient roots. And they manifest themselves with real works of art rich in culture and mastery.

The Giordano family is one of the maternal families that inherits the art of terracotta manufacturing. Rocco Giordano, Mimmo’s father, was one of the first to believe in the artistic tradition of Matera dei Sassi.

And after him the family continues to perform works like once, made of colors and ancestral legends.

You can admire them in the exhibition room of the b & b located near the acceptance. 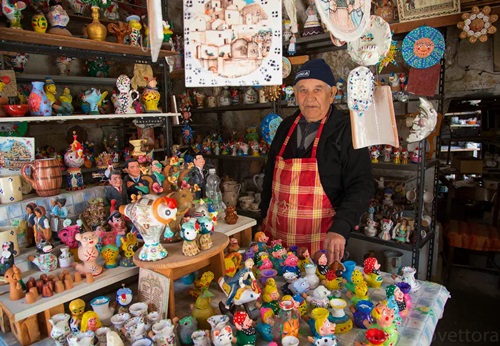 THE HISTORY OF THE CUCÙ

A typical object of prehistoric origin, the whistle of Matera is probably the first sonic toy that dates back to very ancient times.

Civilizations already used it in ages before Christ, and in fact small clay whistles were found in graves of children from the Greek Great Age.

The traditional maternal whistle depicts a rooster, symbol of strength and virility. He was often exposed outside the houses as a defense against malefics.

The sound produced by the figure produces two tones, this has determined the dialectal name of “cuccù” because it recalls the song of the cuckoo.

The whistle then over time assumed an important meaning in the courtship between man and woman.

In fact, the man in conquering the beloved woman could manifest his love by giving a cuccù, if the woman refused it, he also refused the court of the man against him.

Moreover, the more the whistle was large and full of bigger friezes it had to be the love for one’s woman and the offer of material wealth that the lover wanted to give.

The whistles are roughly two different types: they can be air and water.

The air ones work by blowing inside and opening and closing with the use of the fingers, as you would do for a flute, the holes on the back of the drawn figure.

For those with water, of different shape, a small cavity is filled in it and then blowing to emit a trilling sound. Depending on the amount of liquid introduced the whistle will give off different sounds.

Find out more or adjust your settings.

This website uses cookies so that we can provide you with the best user experience possible. Cookie information is stored in your browser and performs functions such as recognising you when you return to our website and helping our team to understand which sections of the website you find most interesting and useful.

Strictly Necessary Cookie should be enabled at all times so that we can save your preferences for cookie settings.